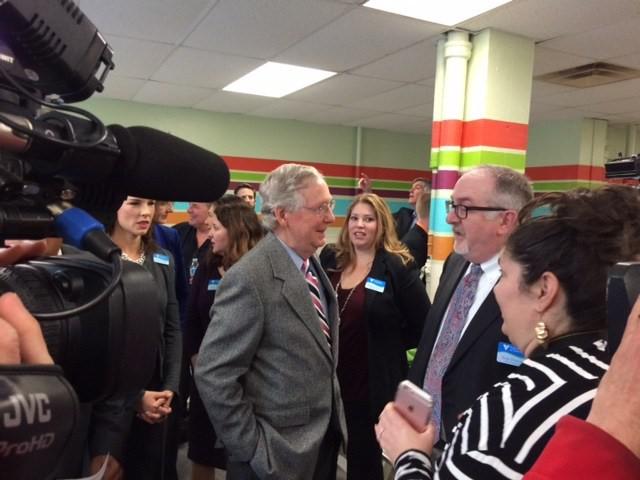 LOUISVILLE, Ky. (WDRB) -- Helping communities deal with the growing heroin epidemic. That's the aim of a bill pushed through the Senate this week by Kentucky U.S. Senator and Majority Leader Mitch McConnell.

It potentially could have an impact in Louisville.

McConnell's bill would help addiction treatment programs expand, including one at Volunteers of America that helped Katie Warren of Bullitt Co.

"I never wanted to be addicted to anything," Warren told WDRB News.

For Warren, it began with pills and quickly grew to a crippling addiction to heroin.

"It took over my body. I needed it. It was no longer socially. It was something that I needed and I could not function without," she said.

Warren found help at Freedom House. It's the unique Volunteers of America residential program that treats women who are pregnant or have children.

"Today I have a 6-year-old and a 3-year-old, happy and healthy. I go to school full-time and we're making a life for ourselves," said Warren.

Programs such as Freedom House could expand under a bill pushed by Sen. Mitch McConnell, the Comprehensive Addiction and Recovery Act, or CARA.

"This is a huge, huge problem. Kentucky, regretfully, is one of the worst states," said McConnell.

"The actual treatment is going to be done in places like this which are having extraordinary success," said McConnell.

But in less than a year, VOA has already outgrown its current building. It hopes CARA will help pay for new space.

"Currently our waiting list is 18 women long; 18 women who are pregnant, waiting to get into drug and alcohol treatment. We simply cannot afford to wait," said Jennifer Hancock, president and CEO of Volunteers of America Mid-States.

For people like Katie Warren, it could mean the difference between life and death.

"People are dying because of this epidemic. It comes down to not having treatment, and not enough resources out there for these people who are addicted and don't have anywhere to go," she said.

McConnell believes the bill will pass the House, and soon be ready for the President's signature.