NEW ALBANY — A recent walking tour neared its end in front of Tim LaDuke’s apartment on a cul-de-sac. A staff leader of Volunteers of America stopped the group again to plea.

“The solution is not community presence, but community participation,” Tiffany Cole Hall said. 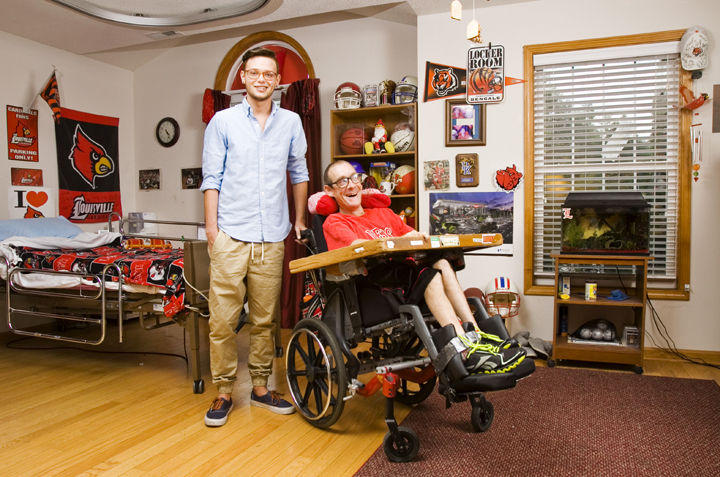 House manager Cole Loney, left, stands with Tim LaDuke, who has cerebral palsy, inside the Volunteers of America run home that LaDuke shares with other disabled adults in New Albany on Tuesday afternoon. LaDuke is one of 72 adult residents on the VOA client list in Southern Indiana. Staff photo by Christopher Fryer

Hall had all but taken the words out of the mouth of Leslie Lowell, in the back of the pack. Lowell’s 26- year-old developmentally disabled son, Andrew Grim, receives VOA’s help including a home similar to LaDuke’s. However grateful, Lowell wants considerably more for Andrew. She hopes like does Hall for broader public awareness and acceptance. Don't label. Reach out. “People need to see people for
what they are,” Lowell said to me, to you.

“Come spend a day, cook for them. Just take them out. When they’re out, they’re more accepted. Don’t look at their disabilities. Look at their abilities. They just want to be accepted, like everybody else.”

Grim and LaDuke are among 72 adult residents of Southern Indiana on the client list of VOA. Most live in 10 apartments — LaDuke’s in New Albany, Grim’s in Jeffersonville, for instances — and typically are cared for day and night. This intense service is obviously costly but less so than was institutionalization. Another public tour is tomorrow as VOA steps up promotion in Southern Indiana. Urging we become more its partner, VOA invariably needs money but asks passionately indeed for our time. “An amazingly wonderful relationship can be had,” Janie Burks, VOA’s regional president, said.

“To be engaged with someone, an individual, is the most meaningful,” Hall said.

VOA is a national not-for-profit organization active in Southern Indiana for a decade. David Block is among its veteran employees, someone especially eager for the ambitions of VOA better to be backed. The afternoon I joined a tour, Block showed off LaDuke’s place, one of two spacious apartments not far off Charlestown Road.

LaDuke, 55, is in a wheelchair and cannot talk. His determination to be as independent as possible nonetheless shouts clear. That’s his bedroom, the one with an array of sports decor plus a poster or two bikini-clad women. He shares space with two other men who also struggle more than most of us can imagine. Each likewise makes much of the hands he is dealt. “Community-based is the thing,” Block said, noting LaDuke was to be taken that night to a Louisville Bats baseball game.

“More than anything, Tim wants to be part of everyday life. He wants people to see his gifts and interests and he wants to pursue those. He wants the good life, wants friends, wants relationships. We continue with that same approach, same philosophy.”

Government support (Medicaid) tends whimsically to ebb and flow, mostly ebb. But Burks told us visitors VOA nonetheless stands ready. “The challenges these individuals have are not challenges that can be easily overcome by the most part,” Burks said.

A 28-year-old man in another VOA home in New Albany has outlived his parents. Where would he go without this option? A nursing home? Grim is more fortunate, though his severe autism provides his family no super choices. “People don’t realize, it changes your whole life,” Lowell said.

© Copyright 2014, News and Tribune, Jeffersonville, IN 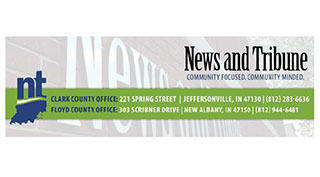