Ashley Kirchhubel says only the grace of God protected her two youngest children from being born into the agony of drug withdrawal.

The 31-year-old mother of four from Louisville abused pain pills for much of her pregnancy with her 3-year-old son Johnny, hiding her addiction from her obstetrician even when asked about drug use. It raged on, and she briefly turned to heroin before entering drug treatment early in her pregnancy with Isaiah, born Sept. 27.

As the number of drug-dependent babies skyrockets, prominent groups of doctors, health officials and drug-control professionals are pushing to have all pregnant women screened for substance abuse so that the nation's opioid epidemic isn't passed on to so many young victims.

"When a child's first days in this world are in agony, that certainly should be a concern to all of us," said Van Ingram, executive director of the Kentucky Office of Drug Control Policy. "We need to do all we can to prevent this."

Growing support for universal screening is a sign of how big the problem has become. Hospitalizations for the condition in Kentucky exploded from 28 in 2000 to 955 in 2013. Those in Tennessee rose tenfold, to 672, between 1999 and 2011 — and already exceed 700 this year. Vermont saw its rate of drug-dependent infants rise from 3 per 1,000 deliveries to 26 per 1,000 in nine years, while Florida's rate more than tripled in five years. 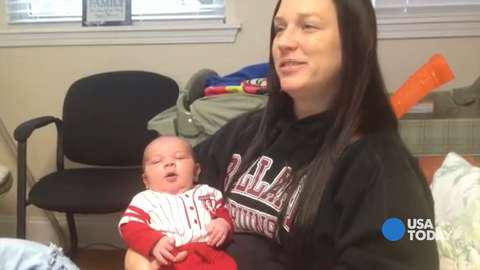 Ashley Kirchhubel, a recovering opioid addict and mother of four, discusses her battle with heroin and pills and why she believes drug screening could help stem the tide of babies born dependent on drugs. USA Today

Nationally, one drug-dependent baby is born every hour, according to the latest national statistics from a 2012 study in the Journal of the American Medical Association, which showed incidence nearly tripled between 2000 and 2009.

To help stem the tide, the American Congress of Obstetricians and Gynecologists and the Association of State and Territorial Health Officials are calling for verbal drug screening followed by a urine test if warranted. The American Medical Association also endorses universal screening.

Not everyone welcomes the idea. Some pregnancy rights advocates argue screening may lead to punishment or loss of custody rather than treatment and sobriety.

But Kirchhubel disagrees. She said if her doctor had screened her urine, she suspects she would have gotten into treatment much sooner to avoid losing her children.

"That would've been a good enough reason to stop," she said as her newborn's tiny fingers curled around hers. "They should screen everybody."

Doctors routinely screen pregnant women for diseases such as HIV and hepatitis, and some say adding drug abuse to the list would reduce the stigma of addiction and keep women from being singled out based on race, income or appearance.

"Nobody can look at another person and tell whether they have a problem," Ingram said.

The obstetricians' group recommends screening first with a medically accepted questionnaire. Those whose answers warrant would undergo a urine screening if they consented, with doctors making them aware of the possible legal consequences of a positive result, such as the need to notify child services.

"Substance abuse screening is critically important in pregnancy," said Dr. Jessica Young of Vanderbilt University in Nashville, a fellow with the obstetricians' group. "It's a time for the physician to educate the patient and help them get into treatment, which can lead to better
outcomes."

Many drug-dependent infants suffer diarrhea, vomiting, low-grade fevers, even seizures. They tremble, sweat and cry inconsolably, and are extra-sensitive to noise and light. Those born prematurely may experience respiratory distress and may need to be put on ventilators.

First-line therapy for severely affected babies is morphine, sometimes along with other medicines, although babies with milder cases often don't need medicine. All require swaddling, rocking and cuddling.

"In the short term, they may have problems feeding or growing," said Dr. Michael Warren, maternal and child health director for the Tennessee Department of Health. "There's not a lot known about the long-term effects" because the problem is relatively new.

Screening could save babies from such suffering and works best when doctors are non- judgmental so moms feel safe enough to be honest about drug use, said Dr. Paul Jarris, executive director of the health officials' association.

Jennifer Hancock, president-elect of Volunteers of America of Kentucky, said the doctor and patient must develop "a mutual, respectful, helping relationship" in which the woman feels supported. That makes verbal screening more effective, she said, adding that urine screening should only be used to validate findings from the verbal screening.

It's also important that moms don't face obstacles to screening, they said; Jarris' group suggests states cover it under Medicaid.

"We've got to keep the babies in mind here," Jarris said.

"Instead, what we see over and over again, is that screening is used as a tool for reporting mothers to child welfare services and police enforcement," she said. "So even if the screening is universal, the reporting is not, which means that low-income women and women of color will continue to be vastly overrepresented in punitive child welfare interventions and, in some states, arrests.

"If legislators genuinely care about improving maternal, fetal, and child health," she continued, "they would take the extraordinary amount of funding spent on drug testing and spend it on comprehensive treatment programs and support for families."

Doctors also point out that urine tests can be falsely positive or negative, or pick up drugs legitimately prescribed to pregnant addicts to treat them, such as methadone, which can also potentially lead to drug dependence in newborns.

And even if screening correctly identifies a problem, doctors say there's too little drug treatment available, particularly for pregnant women. Kirchhubel was on a waiting list before getting into a Louisville treatment center for pregnant addicts called Freedom House, run by Volunteers of America-Kentucky. She stayed for more than three months.

She's been sober since January. She never lost custody of Isaiah and expects to soon regain custody of Johnny, now in the care of a family friend. She said she believes universal screening would lead more women into recovery.

"I'm really lucky. There's a lot of girls who want treatment," she said. "If it wasn't for Freedom House I don't know where I'd be, really. ... I feel very blessed."

The American Congress of Obstetricians and Gynecologists recommends:

• Women should routinely be asked about their use of alcohol and other drugs, including prescription opioids used for nonmedical reasons. Doctors should stress that all pregnant women are asked these questions and their answers will be kept confidential.

• Doctors should use a verified screening tool such as the 4P's questionnaire. (See below.)

• Urine testing is an "adjunct" to confirm suspected substance abuse but should be performed only with a patient's consent.

• Patients must be informed of the potential consequences of a positive test result.

• Parents: Did any of your parents have a problem with alcohol or other drug use?

• Partner: Does your partner have a problem with alcohol or drug use?

• Past: In the past, have you had difficulties in your life because of alcohol or other drugs, including prescription medications?

• Present: In the past month, have you consumed any alcohol or used other drugs?

Volunteers of America of Kentucky hopes to fill part of the need by expanding a treatment center called Freedom House that serves these women. By Jan. 1, the organization plans to more than double the capacity of the center, from the current eight beds to 20. Construction already has begun. 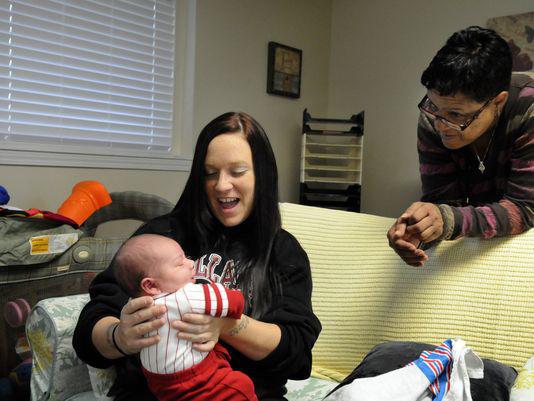 Sylvia Simpson, a staff member with the Freedom House, takes a look at Isaiah, held by his mother Ashley Kirchhubel, a recovering addict. (Photo: By Nina N. Greipel, for USA TODAY )

The expansion is being funded partly by a $1.4 million, three-year grant that will pay for operating costs such as hiring staff. Volunteers of America also has launched a capital campaign to pay for the bricks and mortar and has raised $172,000 toward a $600,000 goal.

"Dozens of pregnant and postpartum women will receive treatment, and 20 to 25 babies will be born drug-free each year because of this expansion," said Jennifer Recktenwald, spokeswoman for the organization.

In 2012, budget difficulties forced Volunteers of America to close Grace House, its other long-term site targeting pregnant women in Louisville.
Officials said the organization saves the community at least $250,000 for every drug-free baby born to a mother receiving services by preventing health and developmental problems in infants.

People can contribute to the campaign by calling 636-0771 or contacting Jennifer Hancock at jenniferh@voaky.org. Pregnant women seeking treatment for drug addictions may call 634-0082. 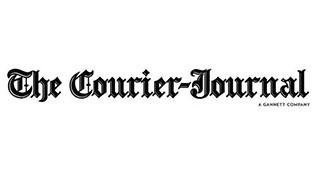