When Michael Newcombe became an active duty combat engineer for the Army, he had the world on a string. Married and in his early 20s, he left for an eight-month deployment in Afghanistan, where bad luck and bad weather conspired together, causing him to fall badly during a dismounted patrol. With a severely injured hip, knee and lower back, Newcombe found himself coming home on crutches. That would have been hard enough, but his return stateside brought the stark realization that his employment options were even shakier than his mobility. With his marriage now on the rocks and dim prospects, Newcombe started the long, daunting process to a new type of normal.

Leaving One Combat Zone for Another

“When I first got back, I was still in the Army but dealing with post-traumatic stress syndrome. My entire unit was sent to Kentucky where I lived in the barracks but shortly after, I found myself medically retired with nowhere to live,” said Newcombe. “I found employment at Sonic’s, but the job only lasted for three or four months. It was very hard, going from a military structure where you’re trained to prepare for life or death to dishing up burgers and fries,” he says.

The months lagged on and Newcombe’s struggle continued. Trying to find a job became increasingly difficult and was compounded by the amount of medication he was prescribed. “I was given 16 different meds to take each day that included anti-psychotic and anti-depressant drugs, plus pain medication. It was hard to get up in the morning and I spent one whole month in bed,” he says. Newcombe wound up in rehab with addiction and anger management issues, no job and no marriage.

Finding employment seemed impossible. When Newcombe’s medicine’s were tweaked, his emotions and reactions were unpredictable and sometimes, out of control. “I can remember taking a bite out of an onion ring in a restaurant and the next thing I knew, I was throwing tables, chairs and screaming over nothing at all,” he recalls. Something had to change, or this young man’s life would never get back on track.

The Slow Struggle Back

After a significant amount of time, Newcombe’s VA disability compensation came through. Still unable to find work, he used that money to live on. With no place to live and no prospects, he relied on friends and kept looking for a break.

“I had a lot of bills and just could not catch up. One of the soup kitchens I frequented was headed up by a social worker who told me about the Volunteers of America, an organization that worked with homeless and unemployed vets. They helped me find a place to live and paid my first month’s rent. They got me on track and into community college, paid for through the GI bill. If not for them I’d still be sleeping on a friend’s couch,” he says.

Newcombe is on his way. He’s still looking for work and striving to achieve an associate degree in science, so he can pursue an electrical engineering career. Now in a happy relationship and the father of a baby girl, he has a bright future ahead of him, but Newcombe has not forgotten the plight of other vets. “I wanted to do something in therapy once. Doctors I’ve met who haven’t been in combat don’t always understand what I’m going through. Now, I want to be able to help soldiers coming home by volunteering in a veteran support situation.” Grateful for the support he’s gotten and willing to continue learning from his past experiences, it’s a pretty safe bet that Newcombe’s best days are yet to come. 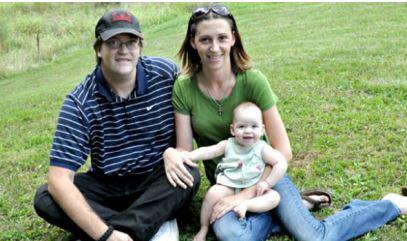