I couldn't believe it was that quick. I was numb.

Michael Pagliaro stood over his oven pouring blueberries into a pan.

“I get up every morning and tell myself I have to do something,” Michael said.

The kitchen’s screen door was open and an American flag was flapping just outside. The U.S. army veteran turned amateur chef was baking a cobbler for a neighbor. Michael has lived a lifetime of helping others.

In 1983, Michael enlisted in the Army. A product of generations of service members, the 17-year-old followed in his father’s footsteps and became a military police officer.

He was stationed at West Point Military Academy when he received orders to go to Saudi Arabia as part of Operation Desert Storm.

When he returned, his story became similar to that of so many other soldiers. He felt out of place in the civilian world and missed the family he had made in the Middle East.

After months of sleepless nights, Michael became restless and needed a way out.

“Some of the healing process with PTSD and traumatic experiences is talking about it. You have to talk with your army buddies and socialize.”

Jason McVey, a case manager at Volunteers of America in West Virginia, understands Michael’s mission. “Michael wants to help others, especially other vets. He is not one for handouts – helping is a form of ‘pay it forward.’”

Soon, Michael hit the road. He worked odd jobs in Florida and visited his fellow soldiers. He saw his former squadron leader in Georgia. He knew that by talking with them about their service, by rekindling their friendship, he was helping them as much as he was helping himself.

From Georgia, Michael got on a mountain bike and continued his journey, finding and connecting with army buddies wherever he could. By bike, train and hitchhiking, he eventually ended up in Alaska for one last visit.

It was January and he was cold and tired. But his post-traumatic stress symptoms were improving and he felt he had helped his friends. He was ready to head home.

Michael had an aunt and uncle in West Virginia and after nearly three years of wandering, Michael was ready to give up his tent and settle down.

That’s when he was connected with the VA and Jason McVey with Volunteers of America. Our Supported Services for Veterans Families program specializes in helping veterans find stable housing and provides comprehensive case management for veterans in need.

Within a week, Jason found a place minutes away from Michael’s family in Athens, West Virginia. And he found Michael something he missed from his time on the road: a bike.

“I couldn’t believe it was that quick. I was numb. To go from a tent to here,” he gestured to the stocked kitchen of his apartment and toward his bedroom door. “Volunteers of America brought me a bed. The first real bed I had slept in for three years.” 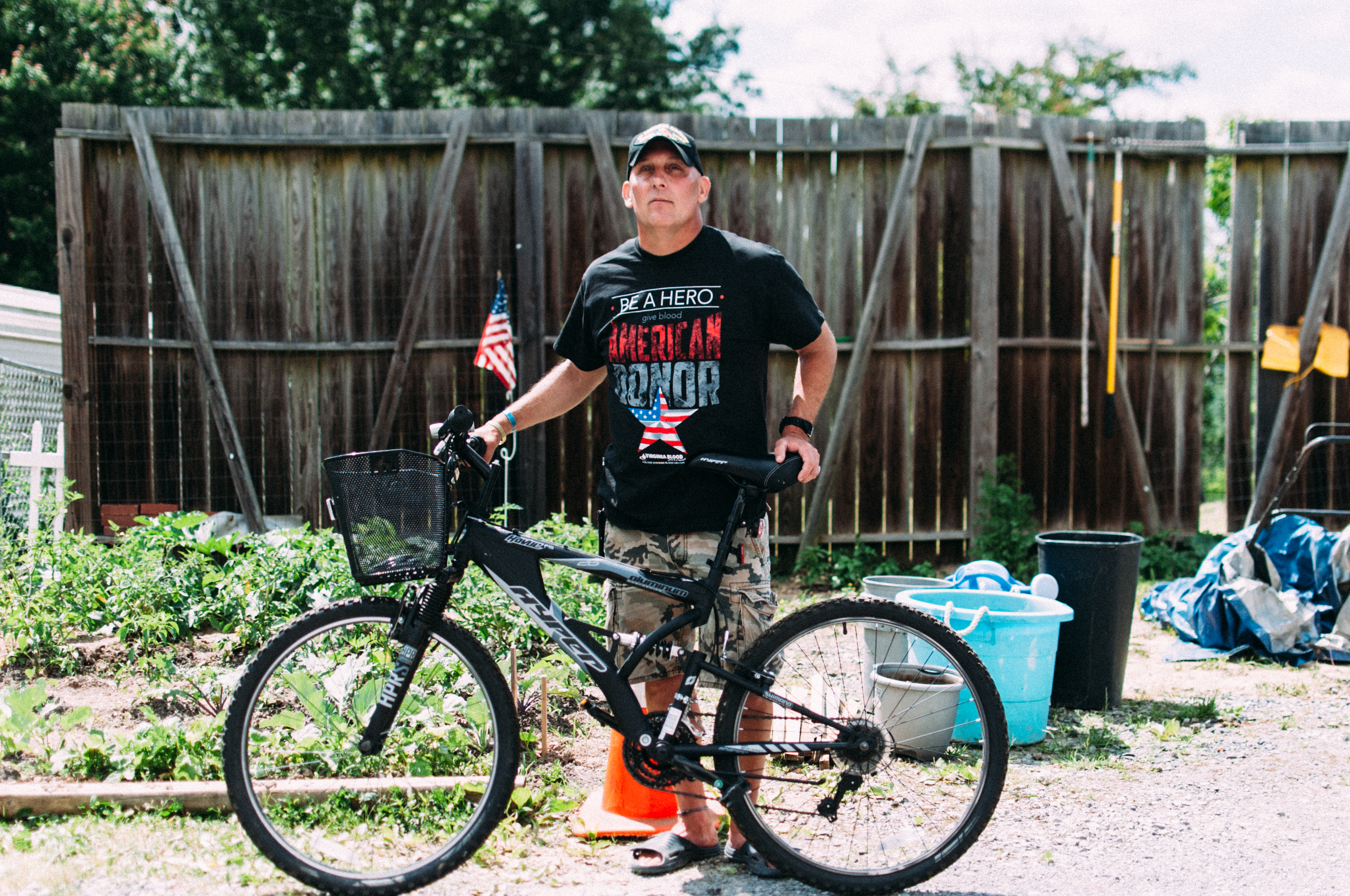 Some of the healing process with PTSD and traumatic experiences is talking about it.

With the stability of the apartment came something just as important: the opportunity to combat post-traumatic stress by gardening and cooking.

“They are my therapy. It gives me something to do and I can share the fruits of my labor with people who stop by.”

“Michael possesses extensive culinary skills. He enjoys cooking for those he is close to and always sends me home with a piece of pie or jar of pickles when I’m done with a visit.”

Michael regularly feeds friends with the produce from his garden. One of those friends is a neighboring veteran who was behind on his rent when Michael met him. He put the neighbor in touch with Volunteers of America, who helped the veteran keep his home.

“They use small American flags outside their doors to indicate to the other they are awake and, if the screen doors are open, available for a visit,” Jason explained. “This took the guess work out of popping in for a visit or wasting valuable cell phone minutes for a phone call. It is an ingenious idea.”

Finally, with the help of Volunteers of America, Michael is home. With a blueberry cobbler cooling by the window and herbs drying along the wall, Michael is practicing the values he shared with his U.S. Army brothers he visited from coast to coast – finding a peaceful place, sharing what you have and being hospitable to others.

Michael is also thinking about one more form of therapy.

As he watched a honey bee fly through his open screen door, Michael said, “I want to get into beekeeping.”

Behind the Scenes: Michael talks a letter that impacted his life.