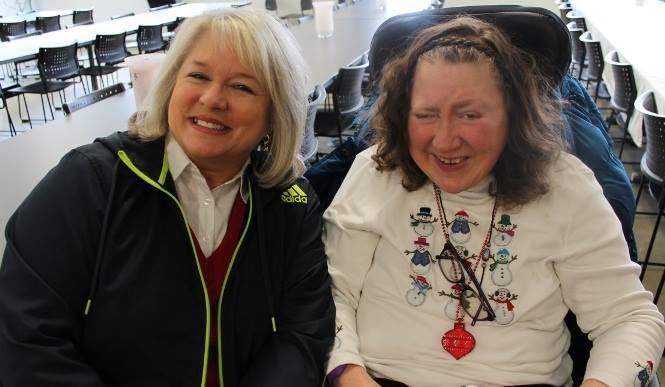 Jenny (left) and Terry Harris, of Mt. Juliet, TN, have been dedicated supporters of Volunteers of America since the early 2000s, devoting their time, talents and resources to our support programs.

In the early 2000s, Jenny and Terry Harris were feeling called to further serve their community in Mt. Juliet, TN. At first they were not sure where to start, until Jenny, Vice President of F&M Bank, was introduced to Volunteers of America through her work as a financial advisor. Shortly after, Jenny joined Volunteers of America's first Tennessee Advisory Council and is still a devoted council chairperson today.

Jenny and her husband, Terry, "adopt" two homes in Rutherford County, TN, where they visit often and celebrate birthdays and holidays with the residents we serve who have intellectual and developmental disabilities. Many of the residents are aging and require medical oversight and receive around-the-clock care and support. Jenny is happy to see these individuals living in a residential neighborhood like her own, as she can recall a time when these individuals would have lived in an institution, rather than "warm, comfortable homes cared for by loving and professional individuals," Jenny shared.

"The care given to these folks is second to none," Jenny said of the homes.

For Jenny and her husband Terry, a retired special-education teacher, the reason they remain so actively involved with Volunteers of America is simple –"it's the wonderful and amazing people who are served."

In 2014, Terry and Jenny furthered their commitment to help create long-term sustainability when they joined our Positive Change Society, a multi-year giving circle. Randy Brothers, our Director of Development in Middle Tennessee, remembers when Terry drove his own truck around town to help pick up items and set up during the early years of Volunteers of America's Tennessee golf scramble.

"Jenny and Terry are two of the finest individuals I've ever met in my life," Randy said. "Their compassion for the individuals we serve is unrivaled."

The annual scramble is now one of their favorite events, as they get to spend the day with friends, family, Volunteers of America staff and some of the individuals who benefit from the scramble's proceeds, Jenny said.

The Harris family feels so connected to Volunteers of America and our mission, that they see the organization as part of their family's future.

"Volunteers of America will always be a part of my family's service. I hope my children and grandchildren will continue for years to come," Jenny said. "Thank you, Volunteers of America, for all you do in the lives of individuals and communities through your ministry of service."