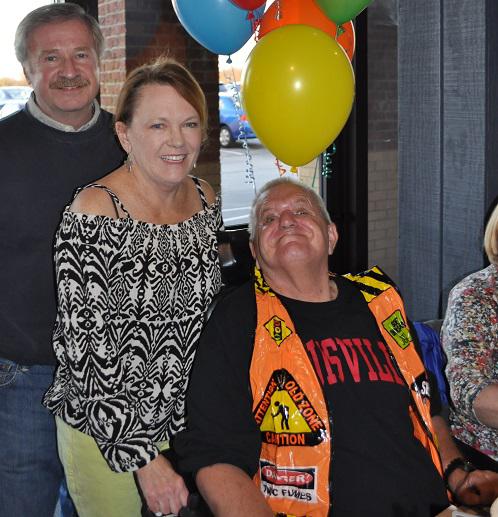 Norma Reynolds can tell you that in the small Eastern Kentucky town where she grew up, she was surrounded by Kentucky Wildcat fans. But Norma's brother, David Price, proudly wears a Louisville Cardinals cap.

One of the reasons he wears a Cardinals cap is because red is his favorite color. Another is that soon after David moved into a Volunteers of America home in New Albany for adults with developmental disabilities, the staff who works with David gave him a U of L cap for Christmas. 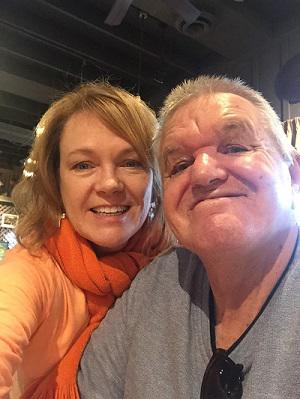 "I remember a Christmas Party soon after David came to Volunteers of America. David loved it because he was surrounded by so many people. The staff had a gift for every client. They knew David liked hats. They not only gave David a gift, but it was a U of L baseball cap. We couldn't believe how they had honed in on what David liked and personalized it. Where we come from they bleed blue, but David had changed allegiances," Norma said.

That small act of kindness is just one of the many reasons Norma Reynolds is a donor and strong supporter of Volunteers of America, and an advocate for adults with developmental disabilities.

David came to Volunteers of America almost 10 years ago, and Norma immediately saw a difference in the level of compassion and care he received and how that affected her brother.

"With developmental disabilities, you are happy if your basic needs are met. Then along came Volunteers of America, and they take David on outings and provide entertainment and so many other things," Norma said.

Before David moved into his home with Volunteers of America, he had been living in a nursing home in Eastern Kentucky. David began feeling depressed, and developed other health concerns. When Norma and her family decided to move David to Louisville, he was hospitalized to treat some of his health issues. His roommate in the hospital changed the course of David, and Norma's, life.

"They say some things happen for a reason. The wife of David's roommate worked for Volunteers of America. She told us about their services," Norma said.

Norma has been a generous donor and dedicated volunteer to Volunteers of America for years. Among other activities, she volunteered her time one day a week helping the External Relations staff with administrative work. Now, Norma will be delivering the vital "Moment for Mission" at the Indiana Building Better Communities Luncheon on May 17.

"I appreciate everything Volunteers of America has done to give David opportunities. Adults with disabilities want the same things you and I want out of life, but it can be really difficult for them to get that. Those of us who have the ability and time and resources to help need to make the effort," Norma said.

The Building Better Communities Luncheon is the major annual fundraiser for Volunteers of America in Southern Indiana, and highlights our expanding work in the region. This year the luncheon will be held at the historic The Grand. In addition to Norma speaking about her commitment to Volunteers of America and what our services have meant to her family, speakers include our organization's President and CEO Jennifer Hancock. She will highlight our veterans services, as well as ongoing work for adults with disabilities, expanding addiction recovery programs and new HIV education and testing programs.

Tiffany Cole Hall, Volunteers of America's Vice-President for Program Services, who has worked closely with David for nearly a decade, said Norma was the perfect choice to tell the story of the work we do with adults with disabilities.

Norma often reminds people of a phrase she has heard frequently from Tiffany and other Volunteers of America professionals who work with David and other adults with developmental disabilities.

"Loneliness is the real disability," they say.

Volunteers of America's services are designed to make sure clients do not feel lonely or isolated.

For David, that means frequent outings. His favorite trips are going to church on a Saturday night out at the Sportsdrome in Jeffersonville, where David and his roommates, including his longtime friend Harry, enjoy racing – though their favorite is the demolition derby.

Volunteers of America has also worked to find volunteer opportunities and employment for David. You can find David enthusiastically greeting fans at University of Louisville softball and volleyball games and patrons at events at the Kentucky Center.

For David and Norma, a key moment came when Volunteers of America connected David to Mark's Feed Store, where he works as an employee one day a week, earns a paycheck and is an important part of the restaurant team.

"David's work at Mark's Feed Store makes him feel such a sense of normalcy and part of society. He loves the paycheck and being around all of the people. And he loves the food. When I take David out to dinner somewhere else, he reminds me that he gets free soda at Mark's," Norma said.

For Norma, Volunteers of America provides the care – and sense of community – that she knows David needs. She wants more people to know about our work and become involved.

"You don't have to be involved in every house or with every person. Helping just one person makes a difference. It can be as simple as taking someone on a drive or going to Dairy Queen for a blizzard. It's so rewarding to make that kind of difference in someone's life. Giving back is something we want to do and need to do. Because Volunteers of America is such a great organization."