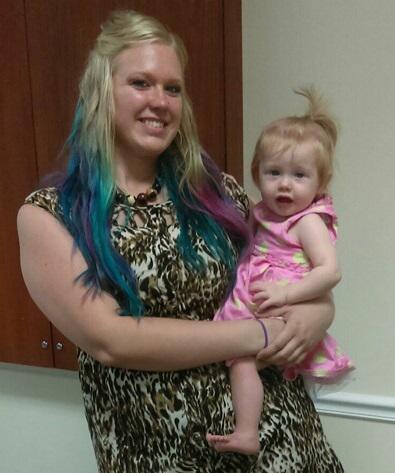 Just over a year ago, Katarina Likins was moving from place to place and using drugs while she struggled to overcome the disease of addiction through support of an outpatient treatment program. Despite her efforts, Katarina knew the steps she had taken were not enough to achieve and maintain sobriety. Little did she know how different her life would look just one year later.

On August 26, 2016, Katarina celebrated one year of sobriety, which she achieved after the six months she spent at Volunteers of America Mid-States' Freedom House addiction recovery program for pregnant and parenting women.

Katarina was referred to our residential treatment program, Freedom House, when she was 36 weeks pregnant with her daughter, Lilliana, after realizing outpatient treatment was not providing the support she needed to overcome her addiction.

After working with a counselor as part of the Freedom House program, Katarina learned that in addition to her battle with addiction, she was also facing other mental health issues she needed to address. With the help of her counselor, she was able to work through these issues and concentrate on her mental and physical health. Katarina credits the comprehensive treatment program and the counseling professionals at Freedom House for helping her fully commit to recovery.

"The structure helped me, and more importantly the one-on-one sessions with my counselor were awesome," Katarina said.

Katarina also attributes her success to her ability to enter our unique program while pregnant and live at Freedom House with Lilliana after giving birth in September.

"I don't think I would have done as well if Lilliana couldn't have stayed with me," Katarina said.

In February, Katarina graduated from Freedom House. She and Lilliana continued to receive Volunteers of America's support while they lived at Louisville Family Housing Services for a few weeks until she found affordable, stable housing.

"I wasn't really sure how things were going to work out," Katarina said. But once she and Lilliana moved into their apartment and settled in to their new life, she saw that "everything had fallen into place."

Last month, Katarina began classes at Jefferson County Community and Technical College to pursue her dream of becoming an auto mechanic, and one day hopes to own her own auto repair shop.

"I always liked working on cars," Katarina said. "At Freedom House, I finally figured out that I wanted to go to school to be an auto mechanic."

Katarina also noted the importance of Freedom House's services because of the lack of addiction recovery programs for pregnant and parenting women in the area.

"It would be beneficial if there was more space," Katarina said of plans to expand Freedom House's services. "People travel from all counties because there's no other treatment like it."

If you would like to learn more about our Freedom House program and how you can help, make plans to attend one of our upcoming Real3 Journey tours.