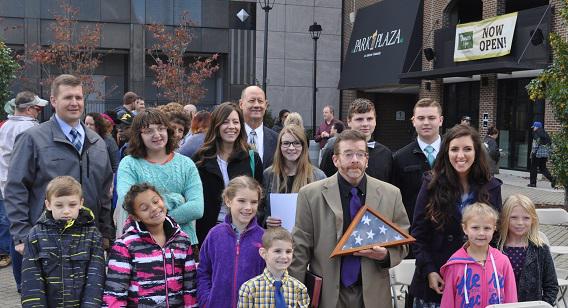 David Edwards (holding flag) credits Volunteers of America with helping him foster and build a
community of support, which has been an integral part of his current and continued success.
Members of David's church joined him at the Veterans Day service to show their support.

David Edwards is a 48 year old Army veteran who served in the United States military from 1985-1988 as an army combat engineer. After being discharged in 1988, David had trouble transitioning back to civilian life, and he found himself struggling with the cycle of addiction. Throughout the next 20 years, David battled alcohol addiction and entered treatment programs unsuccessfully three times. As a result of his addiction, he became homeless and lost the support of his family. After spending seven of ten years homeless - sleeping on benches, couch-surfing and even seeking shelter in a dilapidated toolshed for a few months - David learned about Volunteers of America's Homeless Veterans Transitional Treatment Program (HVTTP) in Lexington.

David successfully completed HVTTP's initial six-month treatment program. Transformed and committed to his recovery and success, David stayed for HVTTP's additional 14-month Career Development Program and completed his Certified Nursing Assistant (CNA) certification and graduated from the program in August 2015. David credits Volunteers of America with helping him foster and build a community of support, which has been an integral part of his current and continued success.

David currently works in a community living center for veterans while he continues his education at Bluegrass Community Technical College to become a Licensed Practical Nurse (LPN). When asked about the most rewarding part of his Volunteers of America experience, David responded, “I can walk down the road, hold my head up, and not be ashamed of where I've been."

David's determination and success has not gone unnoticed. This Veterans Day, David was presented with Volunteers of America's Michael “Ranger Dave" Holland Award. David was one of four veterans this year who received the award, which recognizes an outstanding veteran who completed one of our veterans programs and is continuing on a successful path in life. The award is named after Dave Holland, a graduate of HVTTP and beloved Volunteers of America colleague who passed away in 2013.

David's commitment to his recovery and success after completing treatment demonstrates how fitting it is that he was named the 2015 Ranger Dave Award recipient. To learn more about our services for veterans, visit voamid.org/veterans.