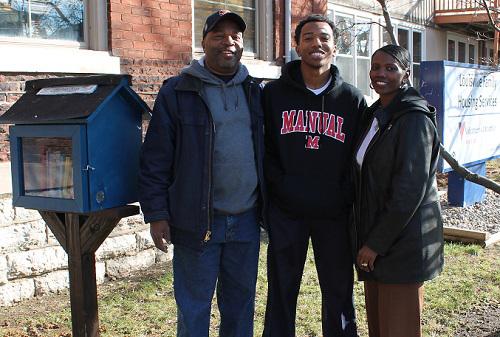 TJ with his parents in front of his completed Little Free Library at Louisville Family Housing Services.

"While at Louisville Family Housing Services, I ran into a friend from school who was volunteering. She told me more about the organization, and I decided I wanted to do something to help as well. I learned about the Little Libraries from a news clip that was sent to my mom by Mary Grissom of Metro United Way," TJ said. "After seeing that news clip, I thought that building some of the Little Libraries for Volunteers of America would be a great Eagle Scout project because it allowed not only the families at Volunteers of America an opportunity to read a book, but also people in the neighborhood. It was a way to help the community." 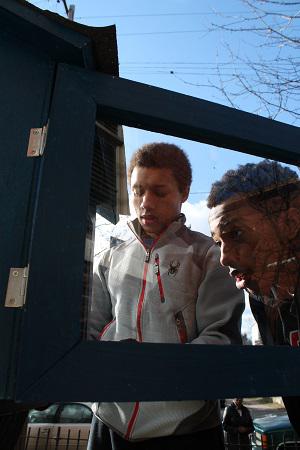 TJ decided he wanted to install Little Free Libraries at three of our Louisville campuses – Louisville Family Housing Services on South Preston Street, our HIV Services office on Goss Avenue near Downtown Louisville and Spanish Cove Senior Housing Community in Southeast Louisville. TJ met with Volunteers of America staff and set his project in motion, securing the funding he needed for supplies, building and painting each library and recruiting classmates to help with the installation at each site.

"TJ has demonstrated exceptional leadership abilities by planning and executing the Little Free Libraries for our organization, and I'm so very proud of and pleased with his work in getting the libraries established," said Volunteers of America Chaplain Donna Trabue, who assisted TJ with his project. "He is an absolute joy to work with and I'm so proud of him for achieving his Eagle Scout recognition."

In addition to his Eagle Scout Award and Scholarship, TJ is also one of just 10 students who received a University of Louisville Brown Fellow Scholarship, a full-tuition, room and board academic scholarship awarded to well-rounded, high-achieving students. He is also a member of the YMCA Black Achievers and the Lincoln Foundation's Whitney M. Young Scholars. TJ will graduate with honors from duPont Manual in May and plans to major in mechanical engineering at University of Louisville.

"To me, the Eagle Scout Award is the epitome of all the work and fun I've put into scouting for the past 13 years of my life," TJ shared. "More than anything it shows that I really want to provide service and give back to the community. I am grateful to my troop members and my duPont Manual friends who helped me with the project, and I'm so appreciative of my dad, who started me in scouting years ago. He's been there with me all the way."